By C Chaitanya June 04, 2013
We started Ozonetel in 2007 with a vision to build voice services. We have always been involved in voice services and even had a hosted VXML platform which we used to power voice services for the automobile industry. We also developed self service IVR applications for Telecom companies on Avaya.

During this time, we were building our own platform. Our experience with different vendors led us to believe that the only way to approach this problem was to own the whole stack. So while we were doing services, we started designing our own PRI card, the hardware which receives the calls. Finally, in 2010, we had a good and stable hardware design. Building hardware is real hard work. There is very little scope for mistakes. In software, you make a mistake, some one raises a ticket, you checkout the source code, patch the code and check it back in and everything is fine. In hardware, you make a mistake, the whole batch of fabricated hardware is gone. There is no way to recover it. But thanks to our CEO, CSN Murthy's experience in hardware(his previous venture Intoto was sold to Freescale semi conductors), we were able to build the hardware with little problems.

So, finally, when we had a card which was to our satisfaction, we felt really confident. By that time, our software stack was also shaping up well and was working seamlessly with our hardware. So we felt the time was right and launched India's first cloud telephony platform, KooKoo at Unpluggd.

Even now, we are one of the very few cloud telephony companies in the world and the only one in India who has their own proprietary hardware. So, without further delay, the star of Ozonetel :) 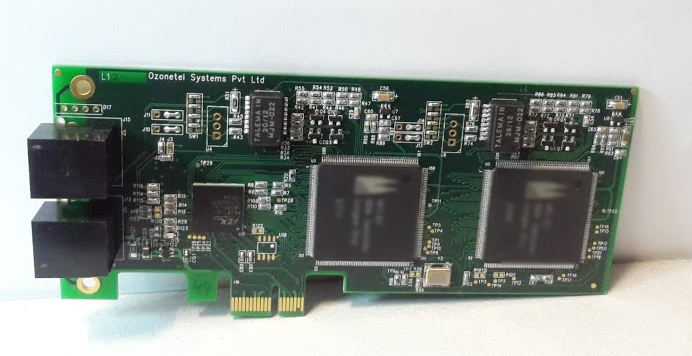 This is one form of PRI card which we have developed which can take 2 E1 ports. We have enabled things like on chip DTMF detection, on chip call bridging etc to make full use of our hardware and reduce the load on our call servers and improve their performance. This is the card which has helped us to handle more than 650 million calls on the KooKoo platform. This card goes into a server which is hosted in a data center. Several of these servers are hosted in a rack in a data center. A live image of one KooKoo rack is given below. 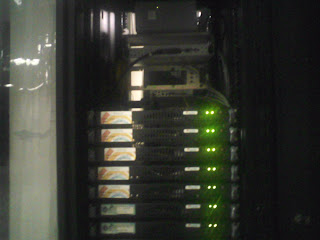 Each data center has several racks like this and we have data centers in 10 locations across India. This private cloud forms the core of the KooKoo platform which has helped businesses like Telebrands, Agarwal Packers, Zovi, Taxiforsure, Intuit, Wipro, Indiamart, HolidayIQ, Bigbasket etc run their communications.

We are now working on a more efficient design of the hardware which will allow us to take more calls/server and this will help us to scale more efficiently.